Is There Fluoride in Your Produce?

Is There Fluoride in Your Produce? 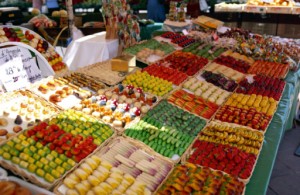 When thinking about fluoride exposure and its sources, most people think about fluoride in the water supply. But many do not realize that fluoride is also present in the food supply since produce is sprayed with pesticides that contain fluoride.

Fluoride is being added to foods through the use of pesticides that contain fluoride. The most common fluoridated pesticide in the United States is cryolite –a white or colorless mineral made up of fluoride, sodium and aluminum in crystal form. The Environmental Protection Agency currently allows up to 7 parts per million of fluoride on more than 30 fruits and vegetables that are treated with cryolite. They are: apricots, beets, blackberries, broccoli, brussel sprouts, cabbage, cauliflower, citrus fruits, collards, cranberries, cucumbers, eggplants, grapes, kale, lettuce, melons, nectarines, peaches, peppers, plums, pumpkins, radishes, raspberries, squash, strawberries, tomatoes and turnip.

One food in particular, grapes, has long been grown using cryolite, using the trade name Kryocide. It is used to fight against leaf-eating pests. Cryolite is applied as dusts, granulars or powders and is applied by ground or aerial spray. It is mostly used on California grapes, potatoes and citrus. Despite cryolites’ use over the past 50 years, insects have not built up a resistance to it, so it is a fundamental pesticide for many growers.

Because cryolite is easily absorbed into the crops that it is sprayed on, people who eat this produce are ingesting an unknown amount of fluoride. And since wine is made from grapes, it is yet another hidden source of fluoride exposure. According to NaturalNews.com, “Cryolite contains aluminofluoride ions that shed fluoride ions, which then pass through the blood-brain barrier and contaminate brain tissue.”

Two Russian studies, from 1977 and 1969 respectively, show evidence to support that workers exposed to fluoride-contaminated compounds experienced negative affects to their reproductive function. Men working in the cryolite industry for 10 to 25 years and who also had skeletal fluorosis – a bone disease caused by excessive consumption of fluoride —demonstrated a decrease in circulating testosterone.  Women whose jobs heavily exposed them to superphosphates, used mainly as a fertilizer, experienced an increase in menstrual irregularities and genital irritation, as compared to non-exposed women.

It may come as a surprise that fluoride is even present in some organic produce. The National Organic Standards (NOS) allow the use of sodium fluoride in organic agriculture. Even though the NOS states that organic produce growers shall not use “natural poisons such as arsenic or lead salts that have long-term effects and persist in the environment” it still allows the use of fluoride, which is non-degradable and accumulates in humans, soil, plants and wildlife.

One research study found that almost all food contains some amount of fluoride since “plants take it up from the soil and from the air. From the soil, fluoride is transmitted through fine hair rootlets into the stems, and some reaches the leaves.”
Another study that analyzed the typical North American diet found that it dishes out about 1.8 milligrams of fluoride each day, which is almost twice the amount of fluoride delivered from drinking one liter of fluoridated water. When we go the extra mile to seek out organic foods in order to avoid pesticides, we don’t expect to get an extra dose of fluoride.

This special health report has been produced by Assure a Smile, South Florida’s Home of Holistic Dentistry. For more information, readers are invited to visit the URLs in the Sources section below. Readers may also schedule an appointment with a holistic Miami dentist online, or call our front desk directly at 305-274-0047.