Does Gluten Cause Weight Gain?

Does Gluten Cause Weight Gain? 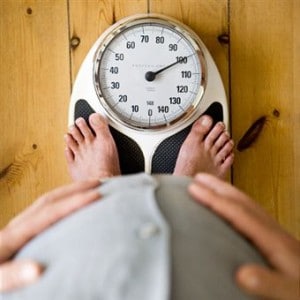 Research published in the January 2013 Journal of Nutritional Biochemistry explains that the major factor of obesity is not calories, but gluten. It says that weight gain from wheat consumption isn’t from the calories, but from the gluten proteins that disrupt the endocrine and exocrine systems in the body and alters metabolism causing weight gain.
A gluten-free diet has been thought to prevent diseases like Celiac disease and obesity, but hadn’t been studied. Therefore, research was conducted on two sets of rats to compare a gluten-free diet to a gluten-based diet. Both groups were fed high-fat diets, but one group was fed 4.5 percent gluten while the other group was kept gluten free. Researchers then compared 16 different markers like body weight, insulin resistance and blood lipid profiles in both groups of rats.
The gluten-free rats experienced weight loss, including a decrease in body weight gain and fatty tissue, without eating less food than the gluten-fed group. This shows that there are valuable effects of a gluten-free diet, like reducing the body’s fatty tissue, insulin resistance and inflammation.
Cattle that are fed wheat are notably sicker and heavier than grass-fed cattle, which further illustrates the benefits of mammals avoiding gluten in their diets.

Weight gain due to gluten consumption can be explained as the body going into survival mode. Because gluten sensitivity, which is estimated to affect 1 out of 30 Americans, can cause problems with absorbing food, minerals and vitamins the body is malnourished and stores fat for later use.
The wheat that we eat today is not the same as wheat from thousands of years ago or even from 50 years ago. Today’s wheat has been modified to grow quicker, resist fungus and be more flexible for industrial baking. Fifty years ago wheat contained five percent gluten, but today it contains 50 percent gluten.
Dr. Alessio Fasano, medical director of the Center for Celiac Research at the University of Maryland School of Medicine, believes that this increase in gluten content is responsible for the increased number of people who are gluten intolerant and those who suffer from celiac disease.  He says, “The prevalence of celiac disease in this country is soaring partly because changes in agricultural practices have increased gluten levels in crops.”
Dwarf wheat, what we eat today, contains large amounts of a superstarch that creates fluffy baked goods like Wonder Bread. According to Mark Hyman, M.D., two slices of whole wheat bread raises your blood sugar more than two tablespoons of table sugar. In people with diabetes, both white and whole wheat bread raises blood sugar 70 to 120 milligrams.  Foods like this, with a high glycemic index, triggers the body to store belly fat and creates inflammation in the body that can cause fatty liver.
Gluten, a protein found in wheat, gives elasticity to dough and helps it rise and keep its shape. It is a combination of glutenin, the major protein in wheat flour, and gliadin, which allows bread to rise. Gluten is found in barley, bran, faro, flour, kamut, some oats, rye, spelt and wheat.
Gluten is everywhere. It is in obvious foods like bread, pastries and pasta, but it is also in almost all processed foods and even shampoo, toothpaste, liptstick and vitamins.  Processed foods usually contain additives like vegetable starches that contain gluten.  Gluten can also be in butter, cheese and teriyaki sauce. If something is not labeled gluten free, it may contain gluten. Gluten-free alternatives include amaranth, arrowroot, buckwheat, beans, corn, millet, nut flours, potato, quinoa, rice, sorghum and tapioca.
This special health report has been produced by Assure a Smile, South Florida’s Home of Holistic Dentistry. For more information, readers are invited to visit the URLs in the Sources section below. Readers may also schedule an appointment with a Miami dentist online, or call our front desk directly at 305-274-0047.
Sources for this health report include:
http://www.naturalnews.com/038699_gluten_weight_gain_wheat_belly.html#ixzz2J2zGOydw
http://www.naturalnews.com/024669_gluten_acne_health.html#ixzz2J30ONwb1
http://www.naturalnews.com/032823_gluten_intolerance_celiac_disease.html
http://health.howstuffworks.com/diseases-conditions/allergies/food-allergy/wheat-gluten/weight-gain-associated-with-gluten-allergy.htm
http://www.foxnews.com/health/2012/05/18/should-go-gluten-free/
http://www.huffingtonpost.com/dr-mark-hyman/wheat-gluten_b_1274872.html
http://www.kindredcommunity.com/articles/wheat-gluten-newly-confirmed-to-promote-weight-gain/p/2482