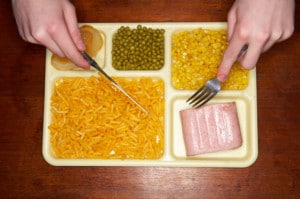 According to the National Cancer Institute, colon cancer has the second highest mortality rate among all cancerous conditions (i). Each year, an estimated 140,000 or more Americans are diagnosed with colon cancer, making the condition the 4th most common type of cancer diagnosis. Alarmingly, the rates of obesity and processed food consumption have also risen alongside colon cancer rates. In light of these recent trends, health experts are asking a very important question: Are processed foods contributing to the spread of obesity and cancer?

In the Netherlands, a team of Dutch scientists recently published a groundbreaking study that has linked processed food consumption with increased risk of colon cancer. Published in the Cancer medical journal, the study examined 485 individuals with Lynch syndrome, an inherited condition characterized by specific DNA mutations that impair the body’s ability to repair “broken” DNA strands. As a result, the body’s risk of developing an “erroneous” cancer cell is increased.
Though the Dutch study followed only individuals with Lynch syndrome, health professionals from around the world say the study is important and applicable to any individual who frequently consumes processed foods.
The study may be summarized as follows:

Armed with this information, lead study author Dr. Akke Botma concluded that individuals who eat large amounts of processed foods may be up to twice as likely to develop colon cancer. In the study, Dr. Botma commented:
We saw that Lynch syndrome patients who had an eating pattern with higher intakes of snack foods, like fast-food snacks, chips or fried snacks, were twice as likely to develop [colorectal] polyps as Lynch syndrome patients having a pattern with lower intakes of snack foods.  (ii)

Why Do We Have Processed Foods?

By learning why we have processed foods, we are better able to avoid them altogether. Learn the most common reasons why food companies and restaurants use processed foods, and improve your ability to proactively identify and avoid them (iii):
Convenience. Processed foods are often the most easy to eat. For example, food companies may combine whole grains, high-fructose corn syrup, and other additives to create a breakfast cereal bar designed to provide a morning meal for individuals who do not have time for a sit-down breakfast. As a healthier alternative, it is wise to set aside time each morning to eat natural whole foods like eggs, vegetables, and fruits.
Longevity. Processed food typically contains additives that increase its shelf life. Hydrogenated oils, trans fat, BHA, BHT, and sodium are all common examples of ingredients that are used to prevent food from decaying naturally. However, numerous studies have linked these additives with increased rates of cancer and the development of other adverse health conditions.
Taste. In some cases, processed food tastes better because it has been infused with added salt, flavoring, or high-fructose corn syrup. Other times, the food is generally more appealing because unnatural food colorings or dyes have been added to them for aesthetic purposes. Recently, health experts have warned consumers that such additives may cause serious illness when consumed regularly. For example, Harvard Medical School produced research indicating that high-fructose corn syrup may cause cancer.
This special health report has been produced by Assure a Smile, South Florida’s Home of Holistic Dentistry. For more information, readers are invited to visit the URLs in the Sources section below. Readers may also schedule an appointment with a holistic Miami dentist online, or call our front desk directly at 305-274-0047.
Sources for this health report include:
(i) Common Cancer Types. National Cancer Institute. Accessed January 27, 2013.
(ii) Processed Snack Foods Increase Colon Cancer Risk. Natural News. Accessed January 27, 2013.
(iii) Why People Like Processed Foods. Natural News. Accessed January 27, 2013.