Home/Fluoride in Your Water/North Americans Unite, Voting to End Water Fluoridation
Previous Next 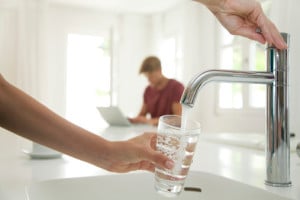 The number of United States cities and municipalities that have voted to end water fluoridation grew rapidly in 2012. As awareness for the issue continues to spread, an increasingly large number of communities are lobbying for natural drinking water that is completely free of fluoride additives. Among the primary reasons for discontinuing the controversial practice are concerns for the general health of the community, as well as concerns that it may incur an unnecessary financial burden that may not benefit the public at all.
Many Americans are surprised to know that there is no clinical research to support the claim that fluoride prevents tooth decay. However, there are numerous studies that link fluoride ingestion with a number of very serious health issues. For example, there have been at least 18 human studies and more than 40 animal studies that demonstrate fluoride toxicity harms the brain. Fluoride is particularly harmful to the Pineal gland, a structure located in the center of the brain that is responsible for regulating vital processes like sleep and puberty, among others.
Earlier this month, we reported that Wichita, Portland, and Santa Fe aimed to end water fluoridation by 2013. Since then, residents of Wichita voted to officially end water fluoridation on November 6th (i). A number of other communities throughout North America have begun to follow the anti-fluoride movement as well, demanding the right to vote on the chemicals that are added to their public water system. Below is a list of the most recent.

O’Fallon, Missouri. With a population of just over 80,000, O’Fallon is the seventh largest town in Missouri. Earlier this year, citizen activists informed city employees of the potential dangers of water fluoridation. City officials responded with a reevaluation their fluoridation practice. Ultimately, the city decided to discontinue water fluoridation altogether. In the O’Fallon 2012 Annual Budget, officials happily report that the fiscal year saw a number of positive changes, one of which was the elimination of fluoride from public drinking water:
“One such improvement is the elimination of the addition of fluoride to the potable water supplied by the Water Treatment Plant (WTP), [which has] saved the City $18,000 annually and reduced the hazard for operators in that they do not have to handle the dangerous chemical on a regular basis,” (ii).
Rosetown, Saskatchewan. North of the United States, the Canadian community of Rosetown has voted to end water fluoridation after an incident at the town’s water treatment facility caused the fluoride-feed pump to burst. It is thought that the feed likely burst due to corrosion, and the community does not plan to repair the pipe. Instead, the community of approximately 2,300 will have access to clean, natural, fluoride-free drinking water.
Lake View, Iowa. In Iowa, the community of Lake View has also decided to discontinue water fluoridation practices. While concerns for health and public safety have been the primary motivators for removing fluoride from water in other communities, the town of Lake View points to another reason: Cost. As a potentially toxic practice with little-to-no economic benefit, water fluoridation is a financial burden that many communities, like Lake View, simply cannot justify.
Cassadaga, New York. Residents of the town of Cassadaga rallied in overwhelming numbers to oppose the retroactive fluoridation of the town’s water system. With more than 75% of residents saying “No” to fluoride, the town’s Board Members supported the community in a 4-1 decision that rejected the fluoride proposal. The 600 members of the community are now safe from fluoridated water, along with some 300 citizens of the neighboring town of Lily Dale who share Cassadaga’s water supply.
This special health report has been produced by Assure a Smile, South Florida’s Home of Holistic Dentistry. For more information, readers are invited to visit the URLs in the Sources section below. Readers may also schedule an appointment with a Miami dentist online, or call our front desk directly at 305-274-0047.
Sources for this report include:
(i) Heck, Josh. With failure of Wichita Fluoride Vote. Accessed November 13th, 2012.
(ii) City of O’Fallon 2012 Budget (click to download the .pdf)