Home/Fluoride in Your Water/Portland, Oregon Successfully Votes ‘NO’ on Water Fluoridation
Previous Next 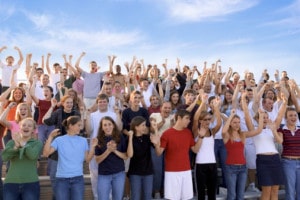 Portland Uses Science and Integrity to Defeat Fluoridation the headlines read, accompanied by photos of cheering crowds and bright, smiling faces. Residents of Portland, Oregon, have successfully voted against a recently proposed water fluoridation program, keeping more than a half million Americans safe from the potentially toxic side effects of fluoridated water. Residents voted against the fluoridation proposal 61% to 39%, sealing what many are calling one of the most significant victories against the controversial practice to date (i).
Residents of Portland have many individuals to thank for the victory. Most notable is the grassroots awareness movement, Clean Water Portland (CWP). After Portland city council issued a fluoridation mandate in September of 2012, CWP sprang into action, collecting an unprecedented 400,000+ signatures to halt the mandate and establish the need for a public referendum vote.
Since September of 2012, CWP has engaged in an awareness campaign to educate the citizens of Portland on the toxicity of fluoride and the documented side effects of water fluoridation programs. Below are two of the most influential studies used by CWP, published by the National Research Council and the Harvard School of Public Health, respectively.

The first scientific study employed by Clean Water Portland might also be the most comprehensive. At 450 pages in length, the National Research Council’s (NRC) report on the toxicity of fluoride illustrates that fluoridated water can potentially cause serious bodily harm.
According to the report, side effects may range from moderate to severe, and they can be the result of drinking water that is fluoridated at 4 parts per million (ppm), a concentration deemed “safe” by the U.S. Environmental Protection Agency (EPA).
According to the study, the side effects of fluoridated water may include (i):

The Harvard School of Public Health produced the second scientific study that Clean Water Portland used as evidence of the potentially toxic side effects of fluoride. Titled Impact of Fluoride on Neurological Development of Children, the report drew from more than 400 studies conducted by research agencies around the world. A majority of research was drawn from studies conducted in China, where the fluoride content of water is widely known to cause adverse health side effects.
Philippe Grandjean, adjunct professor of environmental health at the Harvard School of Public Health, commented on the study with a serious warning regarding the potentially toxic effects of fluoride on brain health (ii):
“Fluoride seems to fit in with lead, mercury, and other poisons that cause chemical brain drain. The effect of each toxicant may seem small, but the combined damage on a population scale can be serious, especially because the brain power of the next generation is crucial to all of us.”

Assure a Smile practices holistic dentistry, a minimally invasive approach that views the teeth and gums as representative of total body health. Our dental treatments use only safe, bio-compatible materials and are “fluoride-free” procedures.  To learn more about holistic dentistry, schedule an appointment with Assure a Smile online or call our friendly front desk at 305-274-0047.
Sources:
(i) “Portland Uses Science and Integrity to Defeat Fluoridation.” Fluoride Action Network. Accessed 28 May 2013.
(ii) “Fluoride in Drinking Water: A Scientific Review of EPA Standards.” National Academy of Sciences. Accessed 28 May 2013.
(iii) “Impact of Fluoride on Neurological Development of Children.” Harvard School of Public Health. Accessed 29 May 2013.